The curse is that two families, one being the Rice Powell family, are stylised as being a white wolf and a black wolf.

The curse was put on the family of Rice Powell, and as a consequence, he lost three of his children, his brother and his sister, while building the house.

Misfortune first struck when cholera took Rice Powell's younger son in 1851. His wife and daughter died before he himself died in 1862. Two years later, his eldest son was killed in a hunting accident on the Isle of Wight. Sarah, the eldest daughter, married a Captain Allaway only for him also to die, a few years later.

Sarah moved to Tenby shortly before the by now haunted house was sold in 1875-76.

The Dutch family, Overbeek, of Calcutta and Cape Town, were connected by blood and it is thought that the hint of their family curse overshadowed the Powell family. 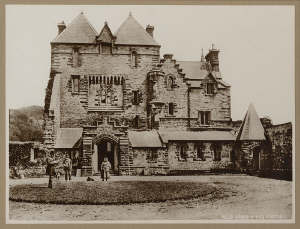