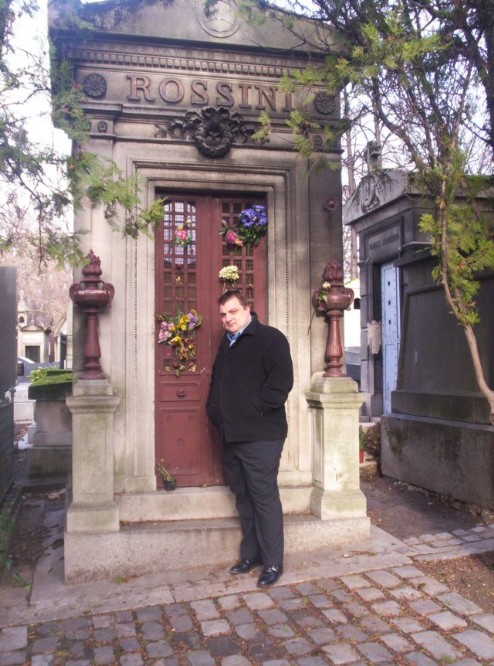 The Most Haunted crew used a Psychic artist and he drew a portrait of a lady and a gentleman, considered to be of Adelina and a gentleman behind her who has since been described as having a resemblance to Rossini.

Rossini was her favourite composer and you will see his name inscribed above the stage in prime position - centre top. (See 'Rossini' and other names inscribed on opera house's ceiling).

Rossini was once asked to name his three favourite opera singers; he replied, "Patti, Patti and Patti."  So their feelings were mutual.

However things did not start out so well; originally Rossini regarded Patti less favourably and it was only later that he fully recognised her professionalism.

The theatre backdrop, with Patti riding a Chariot in Rossini's last Italian opera, Semiramide (which was originally written for Rossini's wife), explains the deep respect each had for the other further - see page on The Chariot.

Adelina Patti, when she died, was at her request buried next to Rossini's grave in Paris. The picture shows Rossini's mausoleum which is near her grave (also you can see Patti's grave).

Rossini's body has since been moved back to Italy however, which it is felt Patti is none too happy about. Maybe this was the 'connection' made by the Psychic artist.

A few of our very own Haunted Opera House Ghost Stories:

(1) The Ghost watch team (Bill Harrison) held a séance in the Theatre where a spirit was said to come from the stage area, blowing open the double glass doors at the end of the auditorium, the curtains billowing out as it passed on its journey. The temperature also changed in the room.

(2) The owner Martin had an experience with the locked and bolted auditorium double doors opening when he was preparing a conference speech. Soon after he took over the castle, he was speaking from the stage, to an empty room, having locked the doors so he would not be disturbed. He was speaking in preparation for a cleaning agency franchise conference, when he sensed a presence. It was as if he was being watched by a friendly spirit, pleased to see something happening again in the theatre, now that it was under new ownership. The doors at the far end of the auditorium opened, but when he went to investigate, there was no one there.

(3) Bouncing Ball Ghost Story - dating to when the room was a children's play area in the Hospital era.

(4) A nervours young girl, about to go out and sing on the stage in a children's performance, was reassured by a well dressed lady in black and encouraged with words along the lines of, "Don't worry, you'll sing your best today". Later she went behind the stage to thank the person who had encouraged her; the lady was not there and no one knew of anyone matching her description. Only later did older members of the entourage put two and two together.