Castle History - The Patti Theatre at the Castle 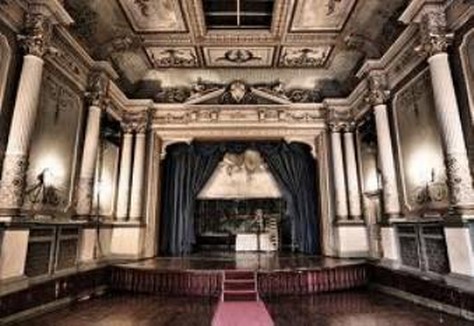 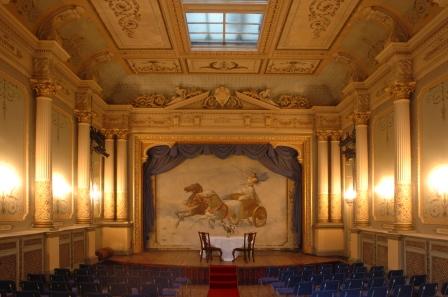 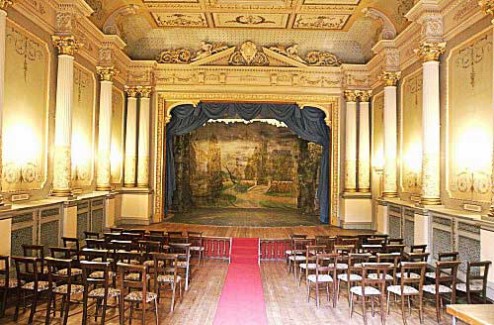 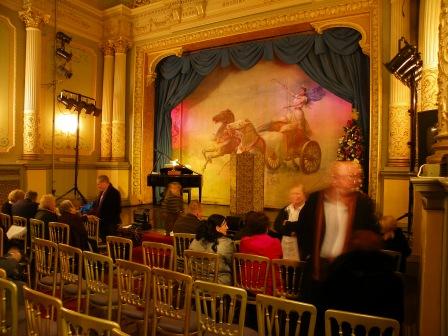 Built in 1891, the theatre was based on Wagners Opera House in Bayreuth, Bavaria.

The theatre at Craig y Nos is a remarkable addition and can hold 150 people. It was designed as a private auditorium where an international Queen of Song could enthrall, with her remarkable voice, all those who came to listen.

The opening ceremony took place on the 12th July 1891, when the list of guests included the Spanish Ambassador and Baron Julius Reuter, founder of the Foreign News Agency.

Sir Henry Irving was to have given the opening address but was unable to attend and a leading actor, William Terris, deputised for him.

This unfortunate man was assassinated by a 'madman' outside the Adelphi Theatre in London, some six years later.

The ascending / descending auditorium floor is the oldest surviving example of moveable floors - a concept pioneered by Adelina Patti.

Two Victorian hand-wound mechanical jacks raise and lower the floor. The floor is lowered when the room is used as a theatre, with the auditorium sloping down towards the stage.

The original theatre chairs even had longer legs at the front than at the back, to allow for the tilt of the floor.

The floor is raised level when in use as a ball room. The hand-wound jacks, still in use today, are under the stage at the front of the auditorium and are accessible from the orchestra pit.

Patti required both a theatre and a ballroom to entertain her guests in. So the theatre doubled up as a ballroom for her and her guests and for her to rehearse her performances in. After entertaining her guests in her theatre, she would take them into the banqueting hall.

Whilst her guests were dining, her servants would remove all the seats in the auditorium before raising the floor to the horizontal level.

The open orchestra pit in front of the stage is covered over and the front of the auditorium floor rises to meet the rest of the stage. The theatre, transformed into a ballroom, is ready for Patti's guests to return to dance the night away.

From 1921 to 1986, the hospital authorities carefully preserved the auditorium although careful and detailed work is needed to preserve this Grade I listed building.

Her theatre remains a time capsule, and the stage is probably the only surviving example of original 19th century backstage equipment.

The sound of her recordings within the auditorium can often affect the people who hear it.

Recently a story was relayed to me of a little girl, a patient at the Hospital, who was performing in front of an audience in the Theatre. This was in the hospital era, when the Theatre was used as a Television and Entertainments room. The girl was nervous, and while she waited in the wings for her turn to sing, a lady in black dress reassured her, saying to be happy and confident, as she would surely go out and sing her best today, and impress everyone. She duly went out and sang as well as she ever had, her confidence bouyed by the reassuring words from the lady in black.

Later she went back on stage to ask after the lady who had so reassured her, seeking her out to thank her for speaking to her so kindly. But no one among the adults present knew of the lady in black that she described. Later, they realised whom she must have been talking to, and Adelina Patti has made her presence felt at other times - see the fireside chat ghost story.

This ghost story was relayed to me recently, by the Children of Craig y Nos, an organisation of former TB patients at Craig y Nos Castle.